BIRDMAN Writers Thought No One Would “Get It” 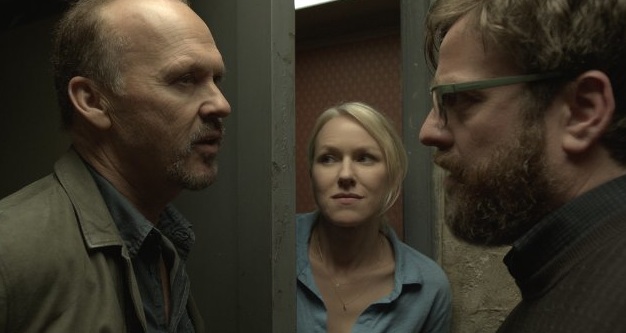 Write a script that takes place in one shot staring Michael Keaton as a burnt out action hero? It sounded just crazy enough to work said the writers of Birdman, the indie sensation that’s sweeping the art house theater scene and bringing the Oscar buzz to its contributors.

With a Rotten Tomatoes score of 94% and a general thumbs up through word of mouth, the screenwriters couldn’t be more pleased. That doesn’t mean they didn’t know how good their film was while writing it.

ScreenwritingU sat down with Nicholas Giacobone, Alexander Dinelaris and Armando Bo to get the skinny on how you take an “out there” concept and make it one fantastic movie.

Due to poor sound quality, this Q&A has also been transcribed below:

Hi everyone, I’m Jenna Milly with ScreenwritingU and I’m here today with the writers of Birdman, Nicholas Giacobone, Alexander Dinelaris and Armando Bo.

ScreenwritingU: Tell me, just to start, how did you get this project, where did this idea come from?

Alexander: Alejandro [the director] called us up and he had this idea about a film he wanted to shoot in one continuous shot. And he brought xx and Armando separately and said would you be interested in making a team with us all to work on the film.

ScreenwritingU: Had you guys met before?

Alexander: Obviously Armando and Nicko are cousins and partners and they worked together on Biutiful together.

ScreenwritingU: So, the idea started with the one continuous shot. How did you guys build this character? What did you do next once you had this assignment and you knew you were working together? How did you build this amazing character? That’s the best part of the movie I think. He’s such a great character and you really want to root for him.

Nicko: I think the interesting process at the beginning was the one shot. We knew that it was going to be a comedy. We knew that it was happening in Broadway. In a theater in Broadway. And, so the character, I mean, was there at the beginning but was more of a form. But then of course, we were discussing the character, I’m beginning to see a lot of depth into the story. It was all about Riggan and his

ScreenwritingU: Can you talk about the process of how you work together. Is it on the phone? Do you meet in a conference room or in a coffee shop? What was it like to build this movie with three of you?

ScreenwritingU: How long did that process take? Six months or the year?

Alexander: It was well over a year. Almost a year and a half before we had a draft that was ready to go. And then evolved as we got that. It changed, but I think the entire process was about a year and a half. It was constantly in flux.

ScreenwritingU: Can you talk about once it’s ready and you’ve taken all that time and the three of you know what you have written, how do you deal with the notes that come in after that.

Alexander: The one thing we talk about when we talk about this process, again going back to what Nicko said before. In our case we wanted the form to follow function as the architectural adage goes. Once we knew it was one shot and our characters had been invented we realized what Alejandro was looking or was looking for was that subjective view and that’s what the single camera does, it gives a subjective not objective view of the camera. So it was constantly changing because of that. By the time we got to the draft that made it rehearsals, by the time we got there we knew what the story was. The rest was going to be not so much rewriting because you couldn’t change very much because of the logistics. Everything served the camera. So, the rewrite process wasn’t your traditional one where you go back and throw out scenes and put in scenes. That’s why it took so long to come up with the first draft. We knew once we got to the shooting script, 99 percent of it was doing to stay because there’s no cuts. So that’s pretty much how we took the rewrite process, really learning from the actors, learning from Alejandro on the set and tailoring it to make sure the film was fluid and never stopped.

ScreenwritingU: As a writer, working with actors, what is that like?

Nicko: It was intense because we had two or three weeks of rehearsals. We had the chance to listen to them and see what they need to do in the scene. I translated a couple of times the screenplay.

ScreenwritingU: Did it feel like there was a lot of pressure because of the one shot? If you didn’t get through two or three minutes, what would happen? Or did that create a stronger energy?

Alexander: Yeah, I think it was more pressure on everybody else once we were shooting than it was on us. The pressure was on us early on. We had to write a movie that we know we can’t cut. Zach was scared to death. And Alejandro, too, was scared. Everybody was on a tight rope, but we also in turn, were in it together.

ScreenwritingU: What was the toughest scene to write?

Alexander: I think the scene with Emma and Michael was really tough. The scene where she tells her father that “you don’t matter.” It is really where the story becomes personal so there’s a lot of pressure on that moment. Until then, you’re sort of weaving your way through the backstage farce/satire/drama. And once the camera comes up on the first conversation with her and her father, the scene changes and I think that was pressure to find the moment that was both honest and direct, between a daughter and a father. For me, that’s great.

ScreenwritingU: How has the reaction been? Did you know you had something really great or did you wait until that first audience screening to see the feedback?

Alexander: I think that’s Armando’s nice way of saying that we’re all shocked. We thought we wrote a movie that Alejandro… you can almost imagine coming to this movie and seeing it, but if you were in it. You can only imagine how petrified we were that nobody would get it or they would hate or it would never find an audience. That’s what we were afraid the reactions were. We’re still in shock. And we’re waiting for the next shoe to drop.

ScreenwritingU: So, since you’ve had this successful movie under your belt, what is the secret, what do you think secret formula is?

Alexander: Yeah, I mean if we knew the secret, that would be great. You start with the imagination, in this case of Alejandro, and then you try to flesh it out and you do your best to tell the truth and you use everything you have in your tool bag, dialog, structure. You try to make it as grounded and structural as possible. You use sort of everything you’ve ever learned growing up as a writer. And then you pray. That’s the secret, you pray and hope somebody listens.

Nicko: You definitely have to love what you’re doing and be a bit confused and try to figure it out to move forward and trust your instincts.

Armando: I don’t know if it’s a secret, but the film is so brave. In each level of the movie there is a lot of risk and that’s why it was a difficult movie to make. If each decision is a risky decision behind, I think that’s what a very special film.

Alexander: I think one of the secrets is work with Alejandro, work with Zach, Michael and Naomi, Andrea, Emma. If you can work with those people, that’s the secret.

ScreenwritingU: Did you consider or think about the casting or did that happen after the draft was finished?

Alexander: We had the brilliant Francine Maisler working with Alejandro and it was about what we were going to write, you know, sort of in a way about the type of person we were going to write. This plays so much like a play almost sometimes more than a film because there is so much dialog. So you need people who can handle both really. This cast was a godsend, absolutely from top to bottom. An absolute godsend. And you add to it Alejandro’s acumen.

ScreenwritingU: If you could write another Birdman for one of these characters, who would you want to follow for a sequel?

Nicko: We could also do the Mike Shiver [Edward Norton] character.