The ProSeries is the flagship of the ScreenwritingU courses – a 6-month, intensive, online Master-class for those absolutely committed to doing whatever it takes to succeed in Hollywood.

This is our LAST PROSERIES EVER!

Welcome to Hal Croasmun’s ProSeries! You’ve just discovered the key that unlocks the secrets of great scriptwriting and Hollywood success – revealing to you why some people make it – what they did right – what the majority do wrong and why they won’t ever make it – and how you can learn all the skills and gain all the vital knowledge that will qualify you as a success story!

This is one of the most exciting trips of your screenwriting life. 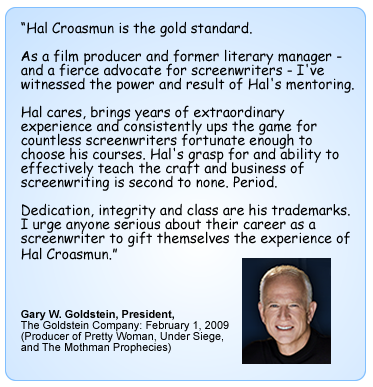 At the end of the course, you’ll be writing compelling, moving, and powerful scripts that’ll have Hollywood begging for more .

But we’re getting a little ahead of ourselves. So …

What Is The ProSeries?

The ProSeries is the flagship of the ScreenwritingU courses – a 6-month, intensive, online Master-class for those absolutely committed to doing whatever it takes to succeed in Hollywood.

Each ProSeries is an expertly-designed sequence of ten classes (programs) and five teleconferences. Each class runs for about 10-12 days, with generally a week’s break between programs.

Each program delivers a lesson each day, with an assignment and generally a 24-hour deadline.

Several of the programs involve posting assignments to a forum for those on your specific ProSeries. Analyzing others’ writing, while reading others’ analysis of yours, will result in quantum leaps in your writing skills.

In short, the ProSeries is an easy way to accelerate your screenwriting, boost your creativity and spark interest in your work!

What Gave Birth To The ProSeries?

Hal Croasmun realized there was a gap for a course that would leap-frog the competition – and give writers the skills they desperately needed to succeed.

At its essence, the ProSeries is about marrying creativity and business so that writers have a real chance to survive and succeed in the tough world of screenwriting.

Why Do You Need It? 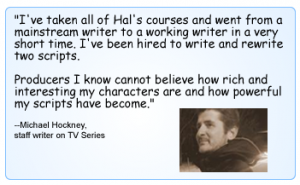 Maybe your scripts are great and Hollywood is already clamoring for you. If so, excellent.

But for most people, rejection and disappointment is their only experience.

This is where the ProSeries comes in and weaves its magic.

This is because the ProSeries will teach you:

Make no mistake, it’s a brutal industry. Over 40,000 new scripts flood into Hollywood every year – frazzled producers receive over 30 calls a day from desperate screenwriters – listen to up to 10 pitches a day – they are desperate to say “NO!” 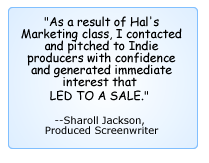 The good new is: the ProSeries will give you the skills to write a script that will not only grab their attention… but make a sale!

Why shouldn’t it be you who sells a script for over a million dollars … who gets the fame, fortune and romance of an ultra-successful Hollywood career … who walks the red carpet at the Kodak theater and gets to give a speech for the Best Screenplay Oscar?

Benefits Of The ProSeries 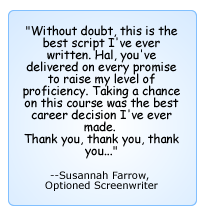 You will acquire the skills that make for a script that sells.

You will learn to:

Get Connected NOW And Put Your Career Into Overdrive

Upon graduation, all successful ProSeries grads are invited into the ScreenwritingU Alumni group – where they rub shoulders with previous graduates.

This leads to exciting things, as people start hooking up for high-level discussions and support – and their career starts to happen!

Since establishment, the SU Alumni has resulted in over 250 deals made as the Screenwriting Buzz spreads the word!

As an Alumnus, you’ll be invited along to special Hollywood Meeting Events to meet the likes of Geoffrey Rush, Martin Sheen, and Michael Madsen – find out what the players want – right from the horse’s mouth!

Plus, the SU Alumni are part of the most successful “writers group” on the net where the group talks and works together every day to make each other more successful.  Some of the best feedback you’ll ever receive will come from this group, and there are many connected screenwriters here to give advice, and sometimes, to hook you up!

Finally, all SU Alumni get to keep up with what’s hot and happening at the SU Alumni page.

How is the ProSeries structured?

The ProSeries builds a building from the foundation up. Every ‘brick’ is laid on the preceding ‘brick’ in a logical, compelling sequence that – when finished – results in a knockout script – and ultimate Hollywood success.

So what are these ‘bricks’?

Stage One: Create the foundation of a Marketable Screenplay.

Stage Three: Elevate your writing to a Professional Level.

Stage Four: Get yourself and your script ready for the market.

The course also includes two one-on-one phone calls with Cheryl Croasmun at various critical stages, to ensure everyone is on track.

What Else Are People Saying About The ProSeries?

“I am having daily revelations through doing this program. They may be on the skills or my characters or part of the story, but they keep coming. Just do the assignments and your writing will improve and you will have break through moments. I really love this course and don’t want it to end.”

“I feel every day I work through this program I learn so much more. Having to write on a regular basis is imperative to becoming better at my craft. It has given me a real guide as to how to make my dialogue interesting for both me to write and for the reader to enjoy.”

“The ProSeries is excellent. My skills have improved and I know that they will continue to. I’m excited about having all these new skills to apply.”

“I rewrote an existing script and optioned it after taking your High Concept and Revealing Subtext classes.”

“After reading the script that I wrote in the ProSeries, a producer was so impressed that she immediately asked me to write a story she’d wanted to tell for years. We have developed a great relationship and

I am currently working with her on the project.”

“I got this amazing literary agent and wrote this book after doing a bunch of work with Hal, and absolutely credit him with helping me rise to a new level of professionalism.”

J.D. Mann, Author of You Call the Shots

“Of the two scripts I worked on in your classes, one won a contest and the other was optioned. I SWEAR by these classes!”

“I am an optioned writer with an agent, and I have found this experience so far to be invaluable. To have the opportunity every day to stretch my creativity, learn a new skill or improve an old one, is an amazing experience.”

“My screenwriting has improved over 200%. If you are really serious about improving your screenwriting, really committed to becoming a screenwriter and hungry to be the best that you can be, there is no better program.”

–Rie Natalenko, Optioned Screenwriter and Winner of Best Unproduced Script in Australia, The IF Awards

“A wonderful course. More useful than the books I’ve read, the seminars I’ve been to, and the conferences I’ve attended.

The difference in my writing has been phenomenal.”

“Your classes have gifted me with the knowledge and credibility to take meetings which led to my work being read by top agents and producers in Hollywood..”

“What Hal has done with the ProSeries is nothing short of genius. Why do I say that? Because others will tell you WHAT you should be doing, but Hal will show you HOW to do it. Step by step by step, skill by skill by skill. It’s one thing to know a skill in theory, another thing entirely to practice it till it’s a part of your writer’s arsenal. Every scriptwriter on the planet who is serious about his or her craft should absolutely take the ProSeries.

I can’t recommend it highly enough.”

Who Should Take The ProSeries?

Take The ProSeries if:

“My ProSeries script has been optioned! We took a meeting with a director with great feature credits, and he picked it up yesterday. Our agents are hammering out the details of the contract.”

But, the ProSeries is not for everyone…

Who Should Not Take The ProSeries?

Bottom line: the ProSeries will give you all the help you need to succeed … but you still need to do the work, and maintain a positive attitude.

The payoff? A brilliant career, and everything you ever wanted from your scriptwriting.

“Many writing teachers will tell you WHAT to do, Hal teaches you the HOW. His system will potentially save a writer many wasted years and give you a real chance to sell your work.  I wouldn’t waste another day writing anything without running my ideas through the system he teaches.

It’s been a very worthwhile course and I recommend it highly.”

About The Course Presenter

After 15 years developing Expert Modeling training programs for Fortune 500 companies, Hal Croasmun decided it was time to turn his attention to his true passion – the film industry.

Hal is a Hollywood writer/producer and founder of ScreenwritingU.com, where he has developed a unique Expert Model approach to screenwriting, which is revolutionizing the Hollywood film industry.  Over the last 12 years, he has interviewed over 700 producers, 120 agents and managers, and 4 studio heads.  These interviews and real experience are the foundation for this amazing program.

As you would expect, the entire course is guaranteed.

Go through the entire ProSeries and turn in every assignment. At the conclusion, if you don’t feel that your screenwriting has improved by at least 100%, you get your money back plus $100.

That’s how confident we are that the ProSeries will quantum-leap-improve your writing!

To receive the refund, you only have to do three things:

If those three things happen – and you are the judge of “not improving your screenwriting by at least 100%” – then email us and your money plus $100 will be refunded, no questions asked.

The ProSeries gives you the skills to start writing the kinds of scripts that Hollywood is crying out for.

It is the only concept-to-marketing screenwriting course specifically designed from the minds of professional screenwriters and producers.  There is nothing else like it.

Not any book, website or course ‘out there’ comes close to achieving the levels of professionalism and help that the ProSeries offers.  The entire focus is on writing scripts that Hollywood wants to read.

By the time you finish, you’ll know exactly what Hollywood wants in a screenplay and how to give it to them.

NOTE: If you’ve taken any of the classes included in the ProSeries, please send me a note and let me know what classes you took and on what dates. You’ll get 30% of the price of those classes credited toward the Pro Series.

Here’s to your screenwriting success!

PS where will you be six months from now? Will you be selling to Hollywood? If you take the ProSeries, it’s likely that shortly after you finish, you WILL be doing just that! But if you don’t take the course, you’ll probably still be at your current level – which isn’t getting you the results you want now, is it?

PPS Of all the courses, seminars and books out there – the ProSeries is utterly unique in crafting all the necessary skills and knowledge you need, one after the other – till the whole scriptwriting picture emerges at the end beautifully. But you will only experience the benefits of all this if you take the plunge and take the course.

“How do your online classes work?” Find out on our FAQ!