When Action and Comedy Merge 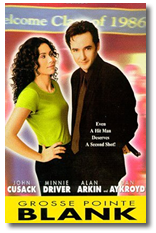 People love action and they love to laugh. Merge the two and you have a great scene — maybe even a great screenplay.

Just so you know, I’m not talking about “slapstick” comedy. That’s one way action and comedy can be merged. But there’s another way that fits more “intelligent comedy.”

If you are writing a comedy, romantic comedy, or an action script and want to give it a twist, you need this technique in your writer’s toolbox.

In any scene, you have action and dialogue. The key is to make one straight and the other incongruent.

You’ll see what I mean as you read the example below.

This scene from GROSSE POINTE BLANK  looks like any other action scene, except for the dialogue, which is incongruent for an action scene.

In case you haven’t seen the movie, Martin is a hitman who has returned to his High School reunion to see his old girlfriend (Debi), but he just discovered that his next hit was supposed to be Newberry, Debi’s father. And if that wasn’t enough, another hit team is there to kill them all.

This scene starts as Martin tries to protect Debi and Newberry from the other hit team that is storming Newberry’s house.

Martin rushes toward the back door which is already opening. A barrel comes through and FIRES at Martin. Martin pulls back behind the refrigerator and returns FIRE. An ASSASSIN comes through the door in a crouch and takes cover behind the cooking island. Martin, yelling back to Debi…

I’m in love with you. I know we can make this work!

NOTE: Right off the bat, beautiful incongruence — someone is shooting at him and Martin uses this moment to express his love and belief that he and Debi can make their relationship work.

This is one of those romantic moments they’ll tell their grandkids about.

rushes toward the island, grabbing an iron skillet off the range, and holds it up like a crossing-guard stop sign. He steps toward the hidden Assassin just as the Assassin rises

The skillet takes two rounds before Martin hammers the Assassin’s head with it. Debi and Newberry arrive in the kitchen. Martin bashes the skillet into the Assassin’s skull, which is beyond our view. He rises spattered with blood and looks at Debi.

I was afraid to commit to a relationship, but now I know I’m ready to make it happen.

NOTE: If ever there were evidence that someone was ready for a relationship, it would be the moment they used a skillet to kill a bad guy, don’t you think?

This is a good example of dialogue that is incongruent with the action. But there are two important things to consider here. First, this is totally within the character of Martin. He’s a hit man and he has been obsessed with Debi since he left town.

Second, we’re at the climax of the movie where the two sides of Martin’s dilemma are coming face to face — Does he continue being a “lone/lonely gunman” or does he give all of that up and create a real relationship with Debi?

Let’s see how it plays out.

Martin drops the skillet and grabs Newberry and Debi gently be the wrists.

I just need time to change.

He ushers them past the bludgeoned corpse and up the back stairs. He spins and FIRES twice back down the stairs at another ASSASSIN coming up, blowing his arms off.

He leads them quickly.

It’s not easy for me. I was raised to close off, to control my feelings…

He takes them into a bedroom, and BLOWS AWAY, an ASSASSIN coming in through the window, emptying his auto. Martin pushes Debi and Newberry into an adjoining bathroom. He backs out through the doorway.

They do. Martin starts away, but stops to get something straight.

I wasn’t raised in a loving environment. (beat) But that’s not an excuse. It’s a reason.

NOTE: The beauty of all of this is that these are all logical things for Martin to say. He’s making his case and this conversation could easily take place at a restaurant or while sitting on a couch.

Martin has been seeing a psychologist, so these lines come from his therapeutic experience. But having this Dr. Phil style confession come out of the mouth of a hit man as he’s killing people provides a more interesting experience and dark humor at the same time.

Martin corners the banister and springs

half-way down the stairs, then hears the front door begin to open.

My soul was empty–

Martin jams in another clip, and chambers a round. He sees Grocer beginning to slip in.

Martin FIRES the twelve-round clip into the door until the slide locks back empty again. Grocer back out fast. Martin hears a gun REPORT from upstairs and moves back toward it, tossing the spent weapon.

NOTE: Now, notice how the dialogue goes together with the action in a comical / disturbing way. “His soul was empty” …and so is his gun. “It’s up to me to fill it”…and he jams in another clip.

An ASSASSIN slams his body against the bathroom door while Debi and Newberry scream from within. Martin flies at him. The Assassin heels on Martin FIRING. Martin pivots out of the line of fire, still moving forward. He takes hold of Assassin’s neck and snaps it. Martin drops the corpse.

The door begins to open revealing Debi and Newberry.

I know what I do isn’t moral, per se, but if you could just look past that, you’d see a man worth loving.

If you read back through it, you’ll see that the action is played straight and the dialogue is incongruent to that action. At the same time, the dialogue is consistent with who this character is and what his main goal is in this movie.

Next time you write an action scene, consider whether a little humor might elevate the quality of the scene and your characters. If you can leave your reader laughing, they’ll remember your script and you.

And if you want to write great comedy in your script, check out: Comedy Writing for Screenplays Class.